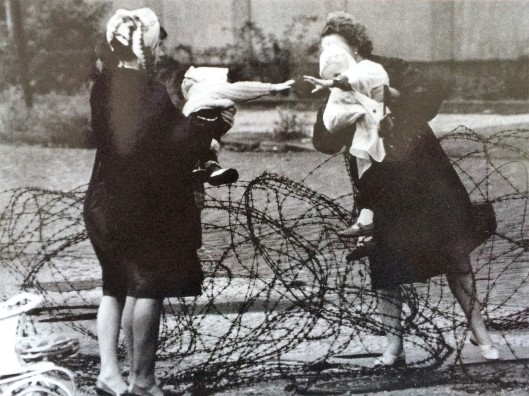 Image from a postcard I bought in Berlin. Details on the back read:

A picture speaks a thousand words, they say. So this week’s prompt started with an image. I picked up this postcard when I was in Berlin earlier this year, and I find it extremely powerful. I handed the image around for everyone to look at, and then simply asked them to write  few responses on pieces of paper, and lay them around the image. to share with the rest of the group. 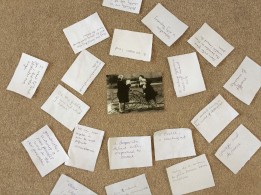 Some examples of what people wrote included:

Poor mothers caring in the wake of destruction.

Grandmothers nurturing a more peaceful word for the next generation.

Why do we continue to place barriers between ourselves?

I want to touch you, but the obstacles are huge.

Hmmm, that’s almost a poem itself! Anyway, I then asked people to write a story in response, taking it in whatever direction they wanted. I was very moved by everything written, and the depth and courage with which everyone engaged with this prompt. I myself was actually reminded of something that I witnessed several years ago, so I wrote about that. Here’s my response – written in ten minutes.

Touch, simple touch. Where she’d grown up it was an easy, celebrated, joyous thing. A friend in the playground offered their back, and small, strong, nine year old hands began to knead and rub and stroke with kindness and warmth.

Soon there was a queue, and others were following her lead. Those receiving stood with palms flat against the wall, as friends rubbed backs. Without being asked or told they understood the unwritten rule of give and take, and instantly reciprocated, changed roles.

The bell rang, and laughing, some holding hands and skipping back into class, they returned to lessons.

Later that day the girl who’d started it all was called into the headmistress’s office. Clearly and firmly, though not yet angrily at least, she was told that such behaviour was inappropriate, and not to be repeated.

Touch. Simple touch. Dangerous? Apparently they thought so. Touch. A reminder of our sameness, the warmth of aliveness, the anatomy we share, however differently, uniquely each body expresses it, the bones, sinew, nerves.

A wall was built that day, and hands, palms alive with intuitive feeling were made to wear invisible gloves they’d never be able to take off unless they developed the awareness to know they were there, a layer of interference between a natural longing to connect and a twisted, fearful perspective. I hope, when she grew up, she was able to take those gloves off.

NOT the social anthropologist. Though confusingly I did an ethnographic PhD.